1 FREE ANCHOR KIT FOR ALL TRAMPOLINE ORDER BEFORE APRIL 27

"The fact that Springfree Trampoline has eliminated 90% of product related injuries supports my view that trampolining can be safe and fun! It’s a great way to get the whole family active and fill your backyard with fun and laughter." 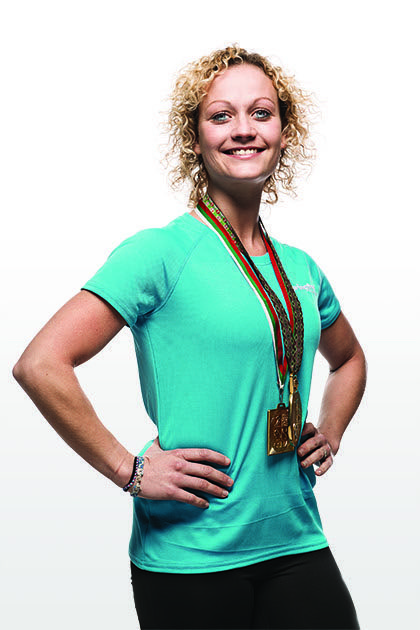 Amanda Parker is a member of the Great Britain Trampoline Team. Growing up Amanda loved to roll, leap, jump and cartwheel everywhere she went, so her parents enrolled her at a local trampoline club at the age of 4 with her older sister in order to learn some basic skills. She came from an active family so sport was a part of everyday life, this included competing in gymnastics at a national level until she was 17. Amanda loves sport in general and was involved in every sport team at school.

Amanda started competing in trampoline at the age of 6 and was representing Great Britain by the time she was 16. By 17 she had competed in her first major international event and finished 2nd in the World Age Group Games in 2003. From there, Amanda made vast improvements and became a member of the senior British team representing Great Britain in numerous World Cups and World Championships in individual and synchronized trampoline.

Her biggest achievements to date are being the 2013 World Games Champion and World Champion in synchronised Trampoline with her partner Kat Driscoll. She was the reserve for the London 2012 Games and holds the record for the highest scoring British female internationally. Amanda was ranked 4th individually in Europe in 2012.

Amanda is thankful for all the support she has received to help her to become a World Class trampolinist. Her parents help and support of her dreams continues as they follow her around the world to see her compete. She has a fantastic coaching team at Edgbarrow Trampoline Club and within the Great Britain National Programme to help her reach her full potential. Additionally Amanda is grateful to her sponsor Springfree Trampoline and the funding received through UK Sport that supports her journey on reaching her dream to be an Olympic athlete.

Alongside trampoline Amanda is following in the footsteps of her family and is a Physical Education teacher at a Secondary School in the UK. However, is taking a break to focus on training for Rio in 2016.